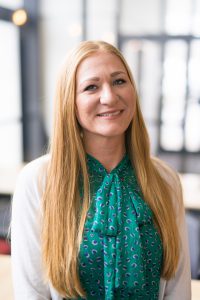 Megan thought she had found her happily ever after—she had a husband, five children, and a comfortable life. But after years of struggling with mental issues, her husband broke, and she came to the awful realization that she and her kids were no longer safe.

She wasn’t willing to be a victim.

After moving her family to Cedar Falls, she spent two years looking for affordable housing. She was working three jobs trying to make ends meet as the sole provider, but had a string of bad luck, and moved her children seven times before landing in a one bedroom apartment. The apartment wasn’t fit for one person, let alone six, and she filed a complaint with her landlord about safety and health issues.

“One agency I went to for help asked to see my finances. I was rejected because they said I spent money too frivolously—weekly Redbox and pizza charges. What they didn’t know, and didn’t ask, was that I had no cable, internet, or streaming services. We lived on the basic channels, and just once a week I wanted to provide my kids the opportunity to be kids. And those pizza charges? I would buy four pizzas at 50% off and that would provide four meals. It was cheaper than buying groceries for six people.”

Rather than fixing the problem for her, the landlord evicted her, leaving her three days to find a new home for her children before they would be sleeping in their minivan.

In a desperate attempt, she walked into House of Hope and asked for a place to stay, assuming she’d have to walk right back out the door when they said no.

For so long she had avoided asking for their help—she never thought of herself as homeless. But now, she needed them, and so did her children.

“It could be anyone. You are one bad break away.”

She was surprised by their reaction. Rather than telling her she needed to apply, the waitlist was too long, or she was irresponsible with her money, they asked her to sit. To breathe. To tell them her story.

She immediately felt safe, and for the first time in two years, she finally caught a break; House of Hope’s largest apartment had opened up the day before. They told her if she did the cleaning, her family could move in that night.

Megan knew she made the right choice when she saw her kids playing with other residents; they felt safe, secure, and loved. They were able to stop worrying about where they would sleep, and spend time thinking about who they were now, two years after leaving their ‘normal’ lives behind.

While her kids flourished, Megan went to work on herself. She needed to figure out how to be a better single mom. This meant taking classes, learning new skills, improving her self worth, and working on ways to process the challenges that life threw at her. House of Hope offered her all of that and more—it offered her a village.

It offered her love.

“In two years on your own, you won’t get the learning, skills and step up that House of Hope gives you.”

Four years out of the program and Megan has never looked back. She has a career she loves, she’s happily remarried, and she’s giving back to the program that gave her so much. In fact, it’s a family affair, her two oldest children regularly volunteer at House of Hope; the youngest is often spearheading efforts at their church to help out; and Megan sits on the board.

Megan needed a place to help her get back on her feet. She needed the nudge and the voices saying, “You can do this. You’re more than you know. Get back up.”

House of Hope gave Megan a lot, but her perseverance is most evident. She now looks at life’s challenges as another bump in the road, rather than an insurmountable mountain.

Are you ready to help empower women of the Cedar Valley?

House of Hope is tried, tested, and proven with an 93% success rate.

We are hiring a Development Assistant to join our Dream Team! For complete job description and to apply, please visit https://www.indeed.com/cmp/House-of-Hope/jobs?jk=295bc6927774aa3d&start=0&clearPrefilter=1